Either you're ALPHA FITT or you're NOT!

The official Alpha FitT Hardcore Training® GEAR logo evolved from a group of friends who called themselves “The Wolf Pack.” This group of friends would occasionally meet at the local gyms; gather on the weekends to watch UFC fights; and support any of the members who were competing in a bodybuilding show.

However, life happens, and some of the member went on their separate ways, leaving only a few close friends within the “pack.”  One of the members always had a desire to start a fitness business. He also believed the “Wolf Pack” concept (the PACK that follows the ALPHA) would be a perfect theme for his business.

Therefore, he sat down and drew a rough draft of a logo with fierce wolf eyes, wolf nose, and fangs that would spell, “Alpha FitT,” adding an extra “t” at the end of the word “fit” to make the spelling odd and unique. The words,  “HARDCORE TRAINING” were added to emphasize the company’s main focus on providing products or services to those individuals who train with a hardcore attitude. 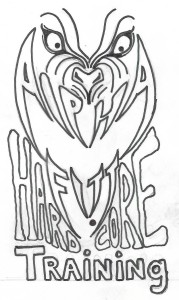 Although the first ALPHA FITT logo was unique, it definitely needed some fine- tuning.  Fortunately, graphic artist, Simon Deevy from Ireland, helped make a dramatic change to the draft logo, which evolved into  the “ALPHA FITT Hardcore Training – wolf logo” concept. After many alterations to Simon’s original logo idea, the new ALPHA FITT logo was finally completed, forwarded to the U.S. Trademark Commission, and officially published and registered on February 19, 2013.

With the company logo completed and registered, he now had to do something with it.  Seeing that this logo was so different from anything he had seen before, this made him think, “I bet this logo would look great on a t-shirt.”  Therefore, this revelation cause him to direct his energy towards establishing, “Alpha FitT Hardcore Training® GEAR.”

The next step was now getting this new fitness apparel company ready for business.  After many months of research, he finally selected a screen-printing company to help him place this logo on fitness apparel, HVTees, www.HVTees.com.  During the apparel creation process, HVTees owner, Juan, gave his opinion on the current logo. Juan believed that the current ALPHA FITT logo could be vastly improved to make the original concept even fiercer.  Therefore, he let Juan send the logo to his company’s graphic artist. The result is what Alpha FitT Hardcore Training® GEAR considers now one of the BEST and BADDEST logos in the fitness industry.

Alpha FitT Hardcore Fitness® GEAR would like to thank the members of “wolf-pack” for helping with the inspiration for the company’s logo; Simon Deevy for creating the “Alpha WOLF logo concept; and Juan of HTVees for helping evolve the original logo into a “BAD ASS” official logo for the company.

Stand out from the crowd…and join the “Wolf pack!”